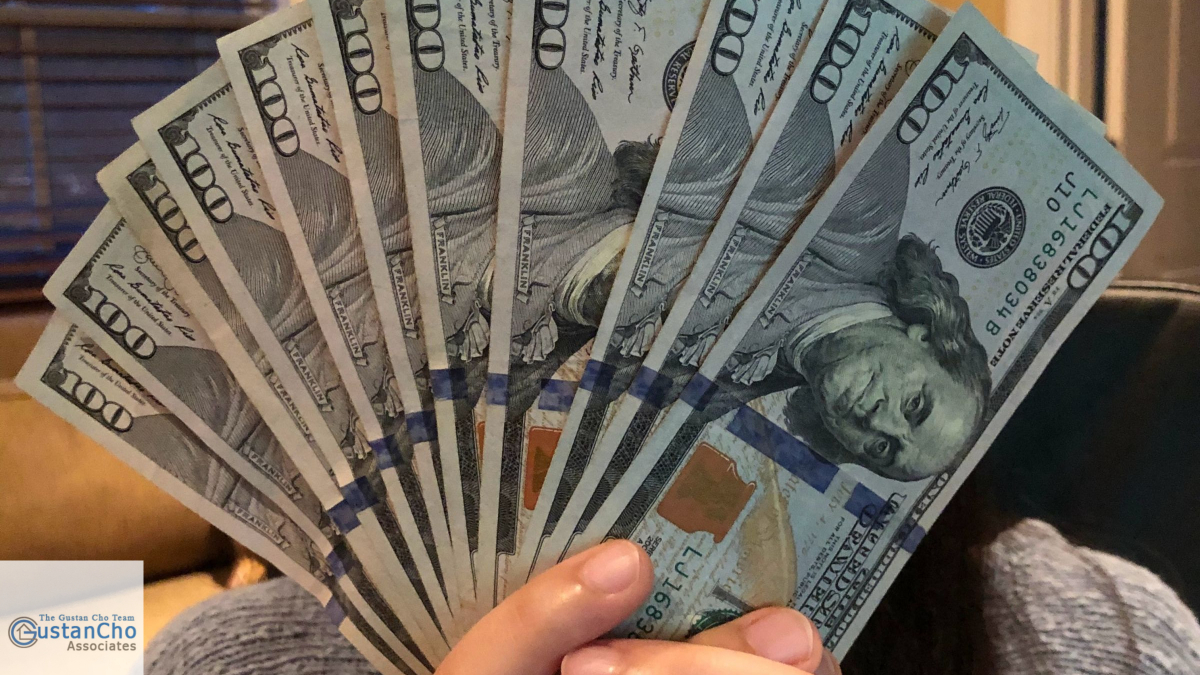 Everything in Chicago costs more money than other municipalities.

JB Pritzker has actually put more restrictions on small businesses due to the recent spike in COVID cases.

As of Friday October 30th, Pritzker has issued his unconstitutional stay at home executive order and ordered all indoor dining and bars to be closed.

Pritzker’s incompetence and power hunger is turning many Democrats against the first term political newcomer.

Billions of dollars of tax revenues are lost from local, county, state government due to the lockdown.

However, JB Pritzker announced he will be deploying troopers from the Illinois State Police to enforce businesses are in compliance with his executive order.

JB Pritzker said he will utilize his executive powers as the governor of Illinois which includes revoking business and liquor licenses.

Analysts and anonymous sources close to the governor’s office say Pritzker is politicizing the coronavirus to benefit his political aspirations to be the Democratic nominee for President of the United States for 2024.

Pritzker is banking on a federal bailout for Illinois so he can get credit for financial mess the state is in.

In the meantime. Pritzker and local and county politicians are resorting to increasing property taxes as well as other taxes to bridge the gap on its budget deficits.

The total tax tab went up by 99%, while the regional cost of living went up by just 36%, the study found. The contrast was even greater in the city of Chicago, where overall property taxes rose by 115%, compared with 87% in the county’s 126 suburbs overall.  More than two decades of gathering data and a series of technological upgrades over that time made it possible. I’m hoping that as people continue to look at this data … that at some point, the plug is going to be put on property taxes, especially in this pandemic. Everyone is cutting back, but the property tax bill is going up. It’s not working.

See The Graph Below On The Percentage Change In Cook County Property Taxes Soaring Year After Year Since 2000: 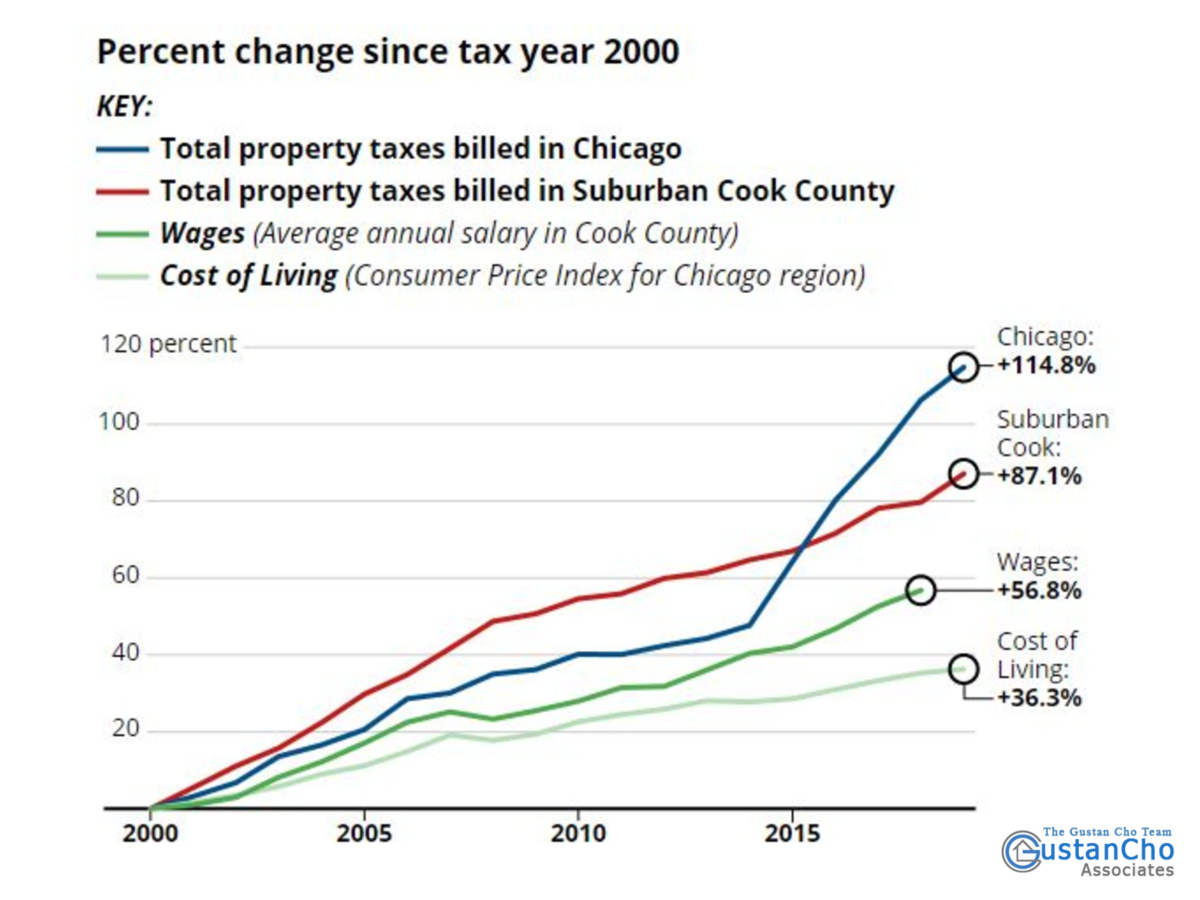 The Cook County Treasurer has been elected to office since 1998.

See The Chart Below On How Much Property Taxes Increased Over The Past 20 Years: 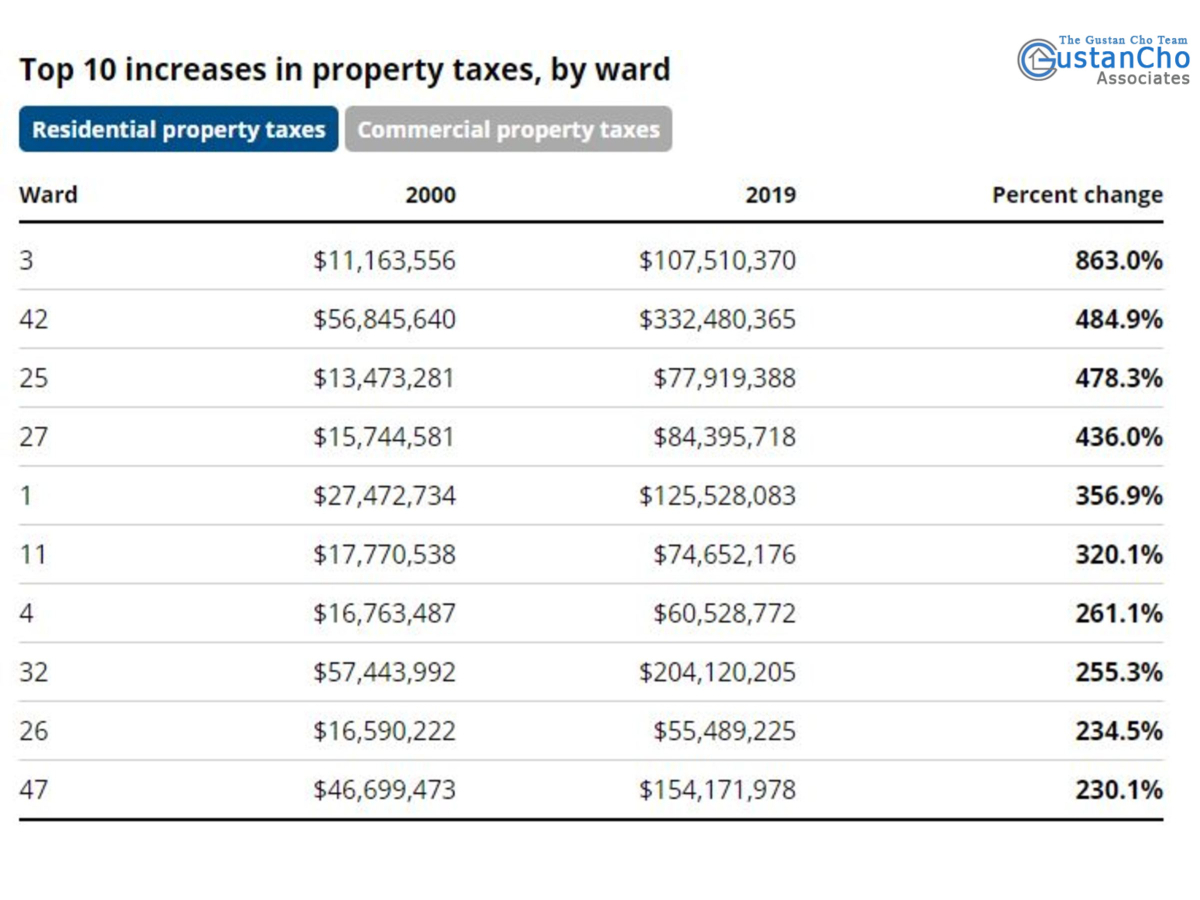 In suburban Cook, residential bills rose by 116%, compared with 57% for commercial properties. Most of the overall $8.6 billion suburban property tax tab is picked up by homeowners, with residential taxpayers now paying about 62% of that tab. That figure is up from 53% two decades earlier.

See The Chart Below On The Top 10 Increases In Property Taxes By Municipality: 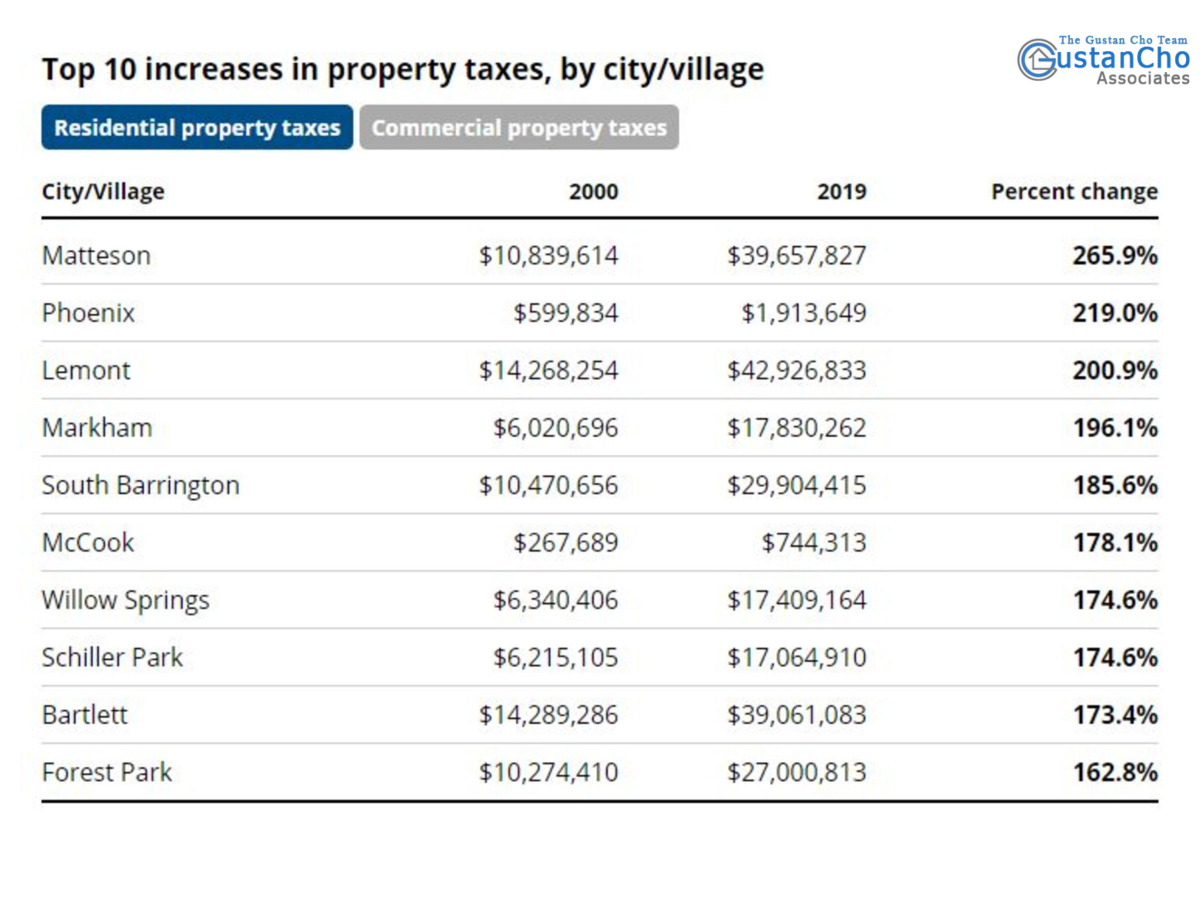 It did not take long for JB Pritzker to be under federal criminal investigation for property tax fraud.

Cook County Property Taxes Soaring that even Gov. JB Pritzker and his wife MK Pritzker appealed their home assessment trying to lower their property taxes on a home they owned next to their Gold Coast Chicago primary home. However, JB and MK Pritzker did it in an illegal way and allegedly committed property tax fraud trying to do so:

Can JB Pritzker be the next Illinois governor arrested, indicted, and sent to federal prison for corruption and fraud? Looks like he is sure headed in that direction.

Businesses in Cook County are in a financial crisis due to JB Pritzker’s heavy restrictions and lockdown orders.

That equation plays heavily into tax bills in some city wards where gentrification has sent property values soaring. For example, in the 3rd Ward that includes the South Loop, the amount billed to residents grew by nearly 863% over 20 years, while the commercial tab more than doubled — for a combined increase of 431%. Historically, property taxes in Illinois are among the nation’s highest because they remain the primary source of school funding. Property taxes also are controversial because they are billed twice a year and cost thousands of dollars each time, reminding voters of the substantial sums they are paying to government. Yet property taxes are considered one of the most reliable money generators because they’re collected in fixed amounts that tend not to diminish much during economic downturns and the state gives local governments the power to set them. Most of your property tax money funds schools, but villages, the county, park districts, suburban townships and many other local government agencies also rely on the cash.

High property taxes is not breaking news for Cook County property owners. Former Chicago Mayor Rahm Emanuel increased property taxes back in 2015 due to the city’s pension fund shortage. Emanuel’s plan included a tax increase of $543 million over four years. The city’s property taxes under Emanuel’s property tax hike increased from $1 billion to $1.7 billion. Even with this historic tax hike on Chicago property owners, Lightfoot is now increasing property taxes by $94 million for 2021. Lightfoot is also proposing property tax hikes every year and for all future years by the rate of inflation. However, politicians from the governor on down the food chain always turn to increasing property taxes as the first source of solution whenever they need to turn to revenue. Illinoisans need to put their heads together and need to research candidates for political office prior to voting for incompetent politicians like Pritzker, Lightfoot, and countless others who are not qualified to be in a public leadership position. Something has to give. Illinois needs a competent governor, and local, county politicians. Why are other Republican low taxed states like neighboring Indiana thriving and Illinois is in a financial crisis? It is due to leadership. Illinois leaders and lawmakers run their state like a business. You do not spend money you do not have. You cannot spend more than what you take in. Indiana politicians lower taxes to attract new taxpayers and businesses to Indiana. Illinois keeps on raising taxes and are losing countless taxpayers and small business owners to other lower taxed states.