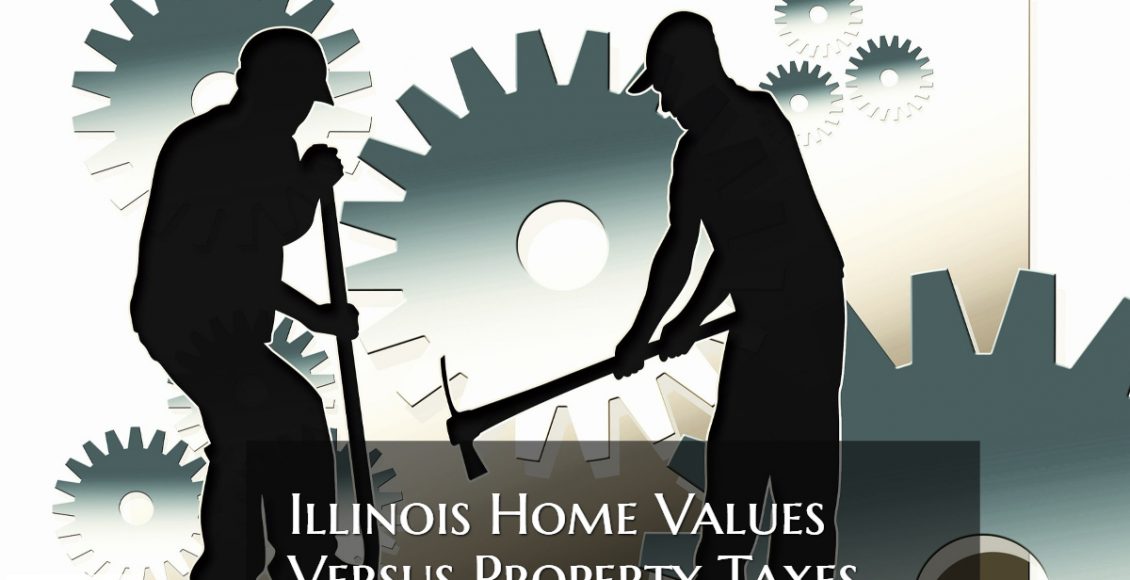 This ARTICLE On Illinois Home Values Versus Property Taxes On Residential Homes Was PUBLISHED On October 20th, 2019

Home values in Illinois is very reasonable throughout the whole state.

In this article, we will cover and discuss Illinois Home Values Versus Property Taxes On Residential Homes.

Illinois is in a financial crisis.

He is also proposing in changing the state’s flat tax system to a progressive income tax plan.

J.B. Pritzker thinks Illinoisans will stay in the state due to the great amenities the state has to offer such as top universities, places to visit, and landscape.

Raising Taxes Is Not The Solution To Solving Budget Deficit

Pritzker does not seem to realize that raising taxes is not the solution to balance the budget:

In general, when property taxes increase, home values depreciate. What this means is Illinoisans are losing hard earned equity in their homes.

Home Values In Illinois Versus Other States

The housing market is hot. In most states, home values have been appreciating since 2011.

Illinois is one of the very few states that still have home prices that are at the Great Recession levels. However, local, county, and state government keeps on increasing property taxes as well as other taxes in the state.

From 2007-2009, the worst years of the Great Recession, home values fell by 10.2 percent in Illinois. That means residents would expect property tax bills to decline by the same amount from 2011-2013, due to the four-year lag in the assessment process. Instead, property tax bills only fell by 2.4 percent during that time.That means property tax rates – the property tax bill as a percent of a home’s value – increased by 7.8 percent. 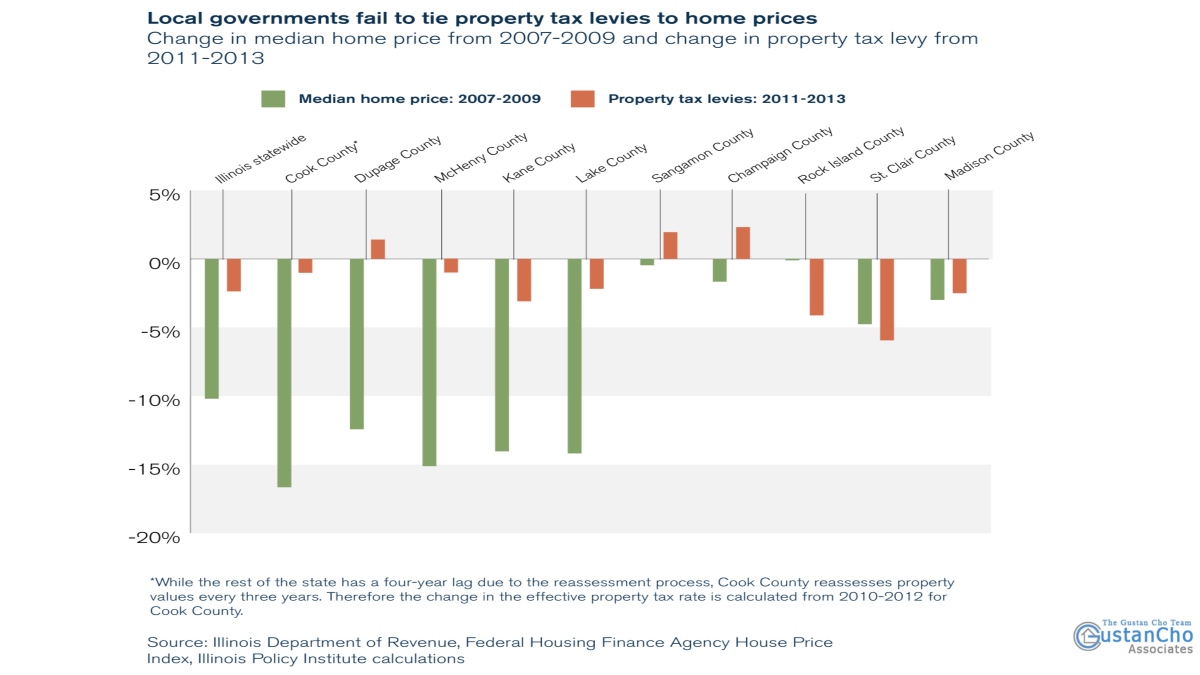 In many towns of Illinois, property taxes went up despite falling home values. In Dupage County, home prices dropped 24% while property taxes increased by 7% since the 2008 Housing Meltdown. DuPage County is one of the best areas in Chicago and surrounding suburbs.

This rapid increase in the tax rate meant the median homeowner in DuPage County was fleeced for an additional $812 on his property tax bill in 2013 compared to 2011, even though the home he had invested in had lost value. It wasn’t just DuPage. Counties across Illinois faced higher property tax rates despite a decline in housing prices. 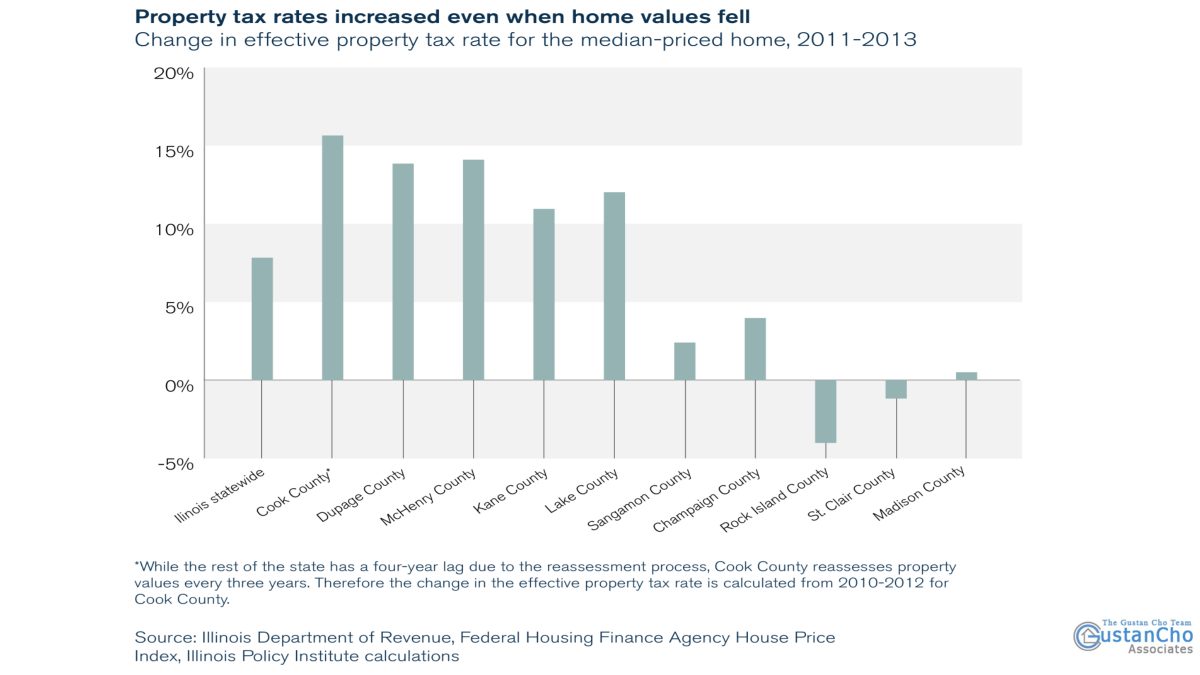 Declining property values takes away equity from homeowners. Politicians realize this. However, despite falling home prices, lawmakers increased property taxes putting a strain on homeowners and their families to make ends meet.

There are two reasons why Illinoisans are fleeing the state to other states.

Here is what Dale Elenteny of Gustan Cho Associates says:

Due to the relatively infrequent nature of housing assessments, changes in property tax revenues should lag changes in home prices. In Illinois, home values are assessed every four years – with the exception of Cook County, where home values are assessed every three years. That means that if home values fall by 1 percent, tax revenues should also fall by 1 percent in the years that follow the decline in home values. Because of the assessment process that doesn’t correct for fluctuations in market conditions, economic research finds that changes to property tax rates lag changes in the price of homes by three to five years. That means when home values decrease, homeowners get no immediate tax relief. In Illinois, even when a new assessment reveals a decline in home values, rates continue to increase. When families lose money on their biggest investment, lawmakers still bill them according to the price of their homes before the downswing. Similarly, during the recovery, while homes are still assessed at their recession level, lawmakers continue to raise tax levies to generate their desired tax revenue.

Basic economics and business sense is the following:

Even though the state is losing countless of taxpayers, Illinois does have hope. Experts predict Illinois will be the highest property tax state by late 2020 surpassing New Jersey’s first position. However, home prices in Illinois is substantially lower than other states in the nation. Property tax reform is absolutely necessary. Raising taxes works but you need to drastically cut spending. Lower housing values means homeowners losing equity in their homes which means they are losing their net worth. If home values increase and appreciate, naturally property taxes should increase. However, this is not the case in Illinois. The state need competent experienced politicians who can run the government like a business. It is not what you make but rather how much you spend. Gustan Cho Associates Mortgage News will keep our viewers updated on developments to this story.