Understanding Illinois Progressive Tax can be confusing. Illinois is in a major financial crisis.

Therefore, the state’s financial crisis is getting worse.

Pritzker and the state’s democrats keep on increasing and creating new taxes.

In this breaking news article, we will discuss and cover Understanding Illinois Progressive Tax Being Pushed By JB Pritzker.

For the past 18 months, JB Pritzker has been pushing changing Illinois’s flat tax to a progressive tax system.

Economists and critics said the following about Pritzker’s FAIR TAX:

Fatso’s FAIR TAX is being used as a constitutional amendment as a blank check for House Speaker Mike Madigan and other state lawmakers, courtesy of Illinois taxpayers. Currently, the state’s constitution currently treats all taxpayers the same under a flat tax. The “fair tax” amendment, pushed by Gov. J.B. Pritzker would remove that protection and give state lawmakers the power to impose tax rates by a simple majority vote on different groups at different rates. It would allow them to add “surcharges” essentially double or triple taxing the same $1 earned for special spendings, such as pensions. It would also open the door for lawmakers to start taxing retirees. But potentially the most devastating would be the impact of new taxation on jobs and an economy beginning to recover from COVID-19 restrictions. Illinois’ jobs outlook was already failing, but then COVID-19 restrictions hit women and minorities especially hard. The “fair tax” proposal would hurt the pandemic recovery of Illinois’ most dynamic jobs creators, imposing new taxes up to 47% higher on over 100,000 small businesses – drying up funds that could create jobs or allow businesses to return to normal. Pritzker and lawmakers already set income tax rates projected to yield $3.7 billion in case the amendment passes, and are pushing the message that 97% of taxpayers would see some relief. But that relief amounts of $6 dollars for low-income Illinoisans out of a nearly $1,800 state and local tax burden.

Pritzker’s passage of a progressive tax in Illinois may be the final straw that destroys Illinois.

The middle class is where the bulk of taxable income exists, and Pritzker already made $10 billion dollars worth of spending promises from a $3.7 billion tax before COVID-19 put a $4.6 billion hole in state revenues. Moreover, only $200 million of the new tax is expected to go toward the state’s No. 1 fiscal threat – increasing pension costs. Ultimately, the Nov. 3 referendum is about trust. Trust is a rare commodity in a state where politicians have a history of breaking tax promises and facing corruption investigations into whether they used taxpayer and ratepayer dollars to benefit themselves and their political cronies.

Here’s a hypothetical example to illustrate how the thresholds work if 5 million Illinoisans cast a vote in the Nov. 3 election, with 4 million of them casting a vote on the progressive income tax amendment:

2.3 million Illinoisans vote “yes” on the question (57.5%). 1.7 million votes “no” on the question (42.5%). Result: The amendment fails. 2.3 million “yes” votes are less than 50% approval from the total of 5 million Illinoisans who cast a vote in the election, and less than 60% approval of the 4 million voters who cast a vote on the ballot amendment question.

What Happens If Illinoisans Vote For Pritzker’s Fair Tax Measure?

Illinoisans should carefully study the negatives of Illinois FAIR TAX.

If voters approve the constitutional amendment, and state lawmakers stick with the proposed rates they passed in 2019, Illinoisans will face income tax rates ranging from 4.75% to 7.99% starting Jan. 1, 2021.

See the comparison of the current flat tax versus the proposed progressive tax chart below: 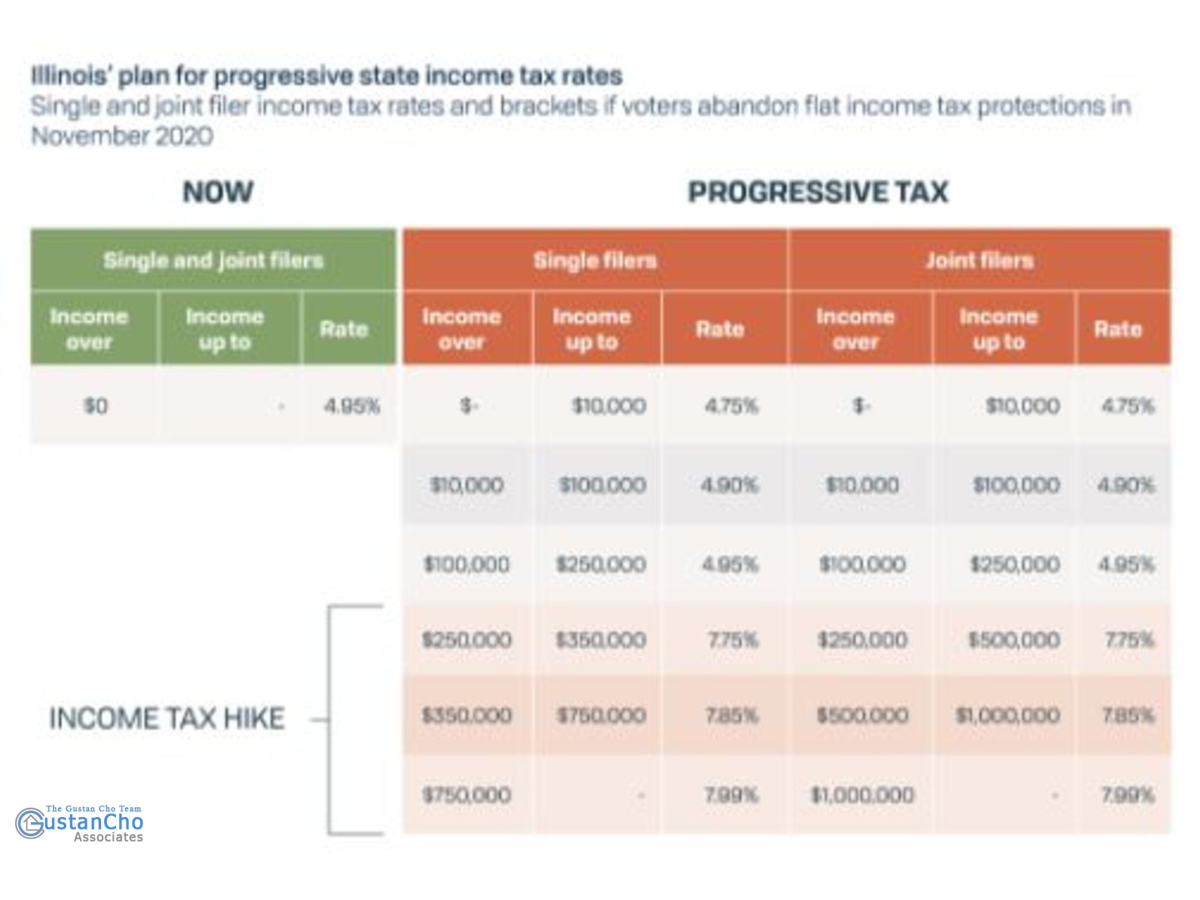 How stupid is our obese governor?

Under Pritzker’s proposed progressive tax system, a married couple in Illinois with two kids earning the $106,244 median annual income and paying the average property tax bill of $4,299 would see $107 in total tax relief, according to the Pritzker administration’s online “fair tax calculator.” But if that same family uses two cars on a regular basis, they already saw a $300 tax hike under Pritzker’s capital plan, which doubled the state’s gas tax on July 1, 2019, and hiked annual vehicle registration fees Jan. 1. For those in the bottom 20% of incomes, Pritzker’s plan saves them $6 dollars on the median average earnings of $12,400. That saving is off their total tax burden of $1,786 ­– the highest in the Midwest and third-highest in the nation for that income level. Illinois businesses will also see tax hikes under the progressive income tax plan, regardless of income. In fact, Illinois’ total corporate income tax would rise to the second-highest in the nation should voters approve Pritzker’s constitutional amendment. Illinois businesses currently pay a total income tax rate of 9.5% – this includes a 7% corporate income tax plus a 2.5% Personal Property Replacement Tax, or PPRT. Under Pritzker’s plan, the total corporate income tax rate would increase to 10.49% (7.99% corporate income tax plus 2.5% PPRT). That would be the second-highest rate in the nation, behind only Iowa at 12%. Iowa’s rate is scheduled to drop to 9.8% by 2021. Neighbor and competitor Indiana have been consistently dropping its corporate tax rate, with the latest drop to 5.25% on July 1.

Illinois is a great state. Chicago is one of the most beautiful cities in the World. However,  with incompetent politicians like JB Pritzker, Lori Lightfoot, Dick Durbin, Mike Madigan, and dozens of other Democrats, the state is hands down going to self destruct. Illinois needs competent new leadership for it to survive. JB Pritzker needs to be replaced. Many are hoping Pritzker will not lead the state for long. Pritzker’s eating has gotten so out of control that you can no longer see his neck anymore. With his major health problems and extreme obesity, Pritzker’s lifespan does not seem like it will not be long. However, a competent leader needs to come in as governor and take charge to save Illinois.