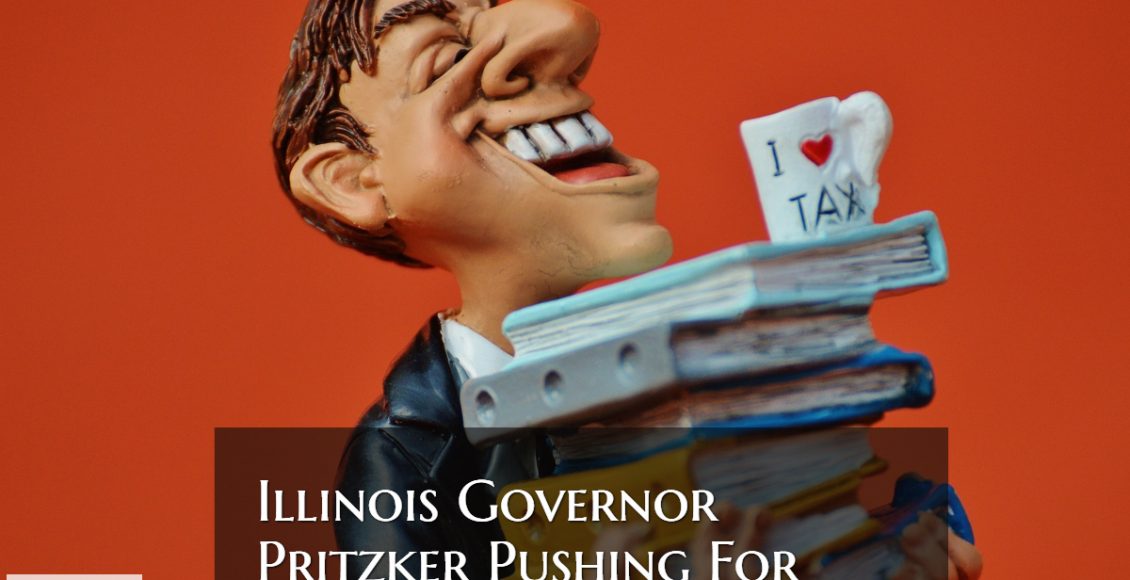 In this breaking news article, we will discuss and cover Pritzker Pushing Fair Tax For Illinoisans To Balance Budget Crisis.

J.B. Pritzker is the billionaire freshman politician who got elected as Illinois’ governor in 2018.

The new graduated income tax rates (Pritzker’s so called Fair Tax) would take effect only if Illinois voters approve a change to the Illinois State Constitution.

What Does Pritzker’s Fair Tax Mean?

Illinois currently has a flat tax system. What this means is a set percentage of a taxpayers income is assessed for every taxpayer. However, with Pritzker’s Fair Tax, it is a progressive income tax system that penalizes high wage earners. Pritzker is trying to convince lower and middle income Illinoisans they will pay lower income taxes while high income earners will pay higher income taxes. He is lobbying that changing the state’s flat tax to his fair tax system will solve the financial crisis Illinois is facing. This is misleading and not true.

Massimo Ressa of Gustan Cho Associates and an expert on state’s income taxation said the following:

Now Illinois is about to make a very expensive mistake in ditching its flat income-tax system for what has been called a “fair tax.” Don’t do it. To have any fighting chance of making it out of the coronavirus-induced economic coma it’s currently in, Illinois shouldn’t change the tax system. Whether you call it a “fair tax,” “progressive tax” or “graduated income tax,” the purpose is the same. State government has been fiscally irresponsible for years and has raised taxes continuously. But politicians never dialed down their appetite for spending, so now they have a deep hole to fill. This time, instead of raising taxes on everyone, the governor and his political allies claim the tax switch would be a “tax on the rich,” even going so far as to say the switch would result in tax increases for Illinois’ “top 3 percent” of earners only. This is false advertising on two fronts. First, when voters go to the polls to vote on the graduated tax amendment this November, they will not be voting on tax rates. They will simply be giving Springfield politicians free reign to set the rates as they see fit. If you think the tax rates being advertised today will become Illinois’ permanent tax rates, think again.

Illinoisans need to understand the basic of Pritzker’s fair tax system and how it can totally ruin Illinois.

The Fair Tax Plan will be the fuel that ignited the fire for Illinois’ road to bankruptcy.

Understanding How The Progressive Tax System Works Under Pritzker’s Proposal

The fair tax plan will not just hurt middle class wage earners, but it will cripple the very businesses that generate the overwhelming majority of income, jobs and investment in Illinois.

I know what business owners do when they face a higher tax bill. Let me warn you: Should voters approve the graduated income tax amendment in November, the fallout will be disastrous.The coronavirus outbreak and the resulting economic shutdown has hurt America’s employers in a way we’ve never seen before. Unfortunately, in Illinois, the pain of the unforeseen pandemic comes on top of an already negative business climate. Illinois’ tax system today is imperfect. It’s wrought with carve-outs, cronyism and corruption. There’s a reason we hear more often about businesses leaving the state than businesses moving to and investing in Illinois. But at least we know what to expect in terms of taxes. If we switch to a graduated income tax system, the legislature will carve up the tax base, applying different rates to different taxpayers, arbitrarily raising taxes on businesses — large and small — whenever they’d like. And the tax rate business owners pay would fluctuate based on their income in any given year. That would create tremendous instability and uncertainty for Illinois’ job creators, who use business income to build capital to grow and expand. Throughout this crisis, Gov. J.B. Pritzker has stood at a podium claiming he’s doing everything in his power to help small businesses. Well, businesses need relief right now, and what a relief it would be if Pritzker and the General Assembly removed the threat of a tax increase on Illinois’ struggling business owners.

Choosing A Loan Officer With No Mortgage Lender Overlays