Trump Says The Feds Should Lower Interest Rates To Zero

In this article, we will cover and discuss what Trump Says The Feds Should Lower Interest Rates To Zero and what this means.

President Trump is no fan of the Federal Reserve Board.

The Federal Reserve should get our interest rates down to ZERO, or less, and we should then start to refinance our debt. INTEREST COST COULD BE BROUGHT WAY DOWN, while at the same time substantially lengthening the term. We have the great currency, power, and balance sheet.

Here is the link to President Trump’s Twitter Feed:

President Trump’s Frustrations With The Feds

The President’s main concern is for the United States to avoid a Recession.

Many market experts say that the U.S. is past due on a recession. A recession now will be devastating for Republicans with the 2020 elections.

What Industry Experts Say About Trump Versus The Feds

The concept of negative rates is attractive in theory, but economists say the effects are far less appealing in reality. While it makes the risk of default virtually nil, negative-yielding global debt —currently estimated at $16 trillion — is bad for savers and erodes bank profitability. It also underscored the president’s growing fascination with negative rates, a condition where investors have sacrificed yield for safety by paying the bond issuer. As a highly-leveraged property developer, Trump is thinking about negative rates from the perspective of a borrower. However, “the Fed’s lukewarm appetite for negative rates is partly because officials know that it could cause outrage among savers and drag the central bank into a political maelstrom. As yields on safe-haven government debt collapse globally — largely because of fears over the economy and expected central bank easing — borrowing costs have dropped sharply.

This is a developing story. Gustan Cho Associates Mortgage News will keep you posted as new developments happen in the coming days and weeks. If you have any questions on this article and/or other mortgage-related topics, please contact us at Gustan Cho Associates at 262-716-8151 or text us for a faster response. We are direct lenders with the ability to broker with no lender overlays licensed in multiple states. Or email us at [email protected] The Team at Gustan Cho Associates is available 7 days a week, evenings, weekends, and holidays. 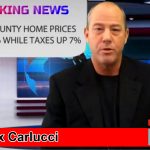