This ARTICLE On Kankakee Illinois Pension Debt Shortage Missed By The City Was PUBLISHED On October 6th, 2019

In this article, we will cover and discuss the Kankakee Illinois Pension Debt Shortage Missed by the City.

Police And Fire Pension Fund And How It Works

There are hundreds of cities in the state of Illinois. For villages, towns, and/or cities with a public safety pension system, the Illinois Department of Insurance mandates a minimum contribution amount.

See the chart below on the Kankakee Illinois Pension Debt:

The state insurance agency found that the fire pension fund of Kankakee to be in the worst underfunded condition.

Normally, for a pension fund to have enough reserves, municipalities have more employees than recipients. Otherwise, the system is broken and needs to be fixed.

The Illinois Department of Insurance suggested number for the city to contribute to its fire pension fund was $3.9 million for the 2018 fiscal year.

The Illinois Department of Insurance recommended had a higher figure for 2018 than the previous year.

This is not a good formula and is the reason why the pension fund has been experiencing shortages year after year.

Kankakee is not the only city that has a major pension debt shortage.

The city did see an increase in revenues in the first quarter. However, critics are fearful of taxpayers leaving the city. Many Illinoisans have left and/or are thinking of leaving the state due to high property taxes and other taxes in Illinois.

Other Bright Ideas By City Officials In Fixing The Financial Crisis

Kankakee is not alone with mounting debts they have no means in paying.

Dangers Of The City’s Financial Crisis

It seems like the Mayor and members of the City Council have no immediate solutions in the rising pension debt shortage.

Analysts and experts say the Kankakee Public Safety Pension Fund is hands down the worst-funded fund in Illinois.

How To Avoid The Pension Fund From Going Bankrupt

Basic business sense is not how much you make but what you spend. This is one of the reasons why Illinois is so broke. There is no reason why city, county, state governments should be broke. Raising taxes is not the solution. Raising taxes can backfire big time because it can lead to taxpayers fleeing the state. Illinois is currently experiencing an exodus of the resident to other lower-taxed states such as Tennessee, Kentucky, Florida, Texas, Georgia and dozens of other lower-taxed states. Lawmakers and government leaders need to cut spending. They need to run government like a business. Privatize everything you can. Keep salaries and benefits to a minimum. You cannot give in to labor unions. Labor unions want everything from higher salaries to the best benefits for their members. To run a profitable institution, you cannot splurge and need to run a slim budget operation. Illinois is a great state but is currently under a state of emergency due to its financial crisis. Gustan Cho Associates Mortgage News will keep our viewers informed with upcoming developments and latest news. 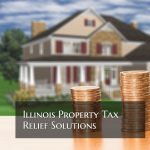 Next Post How Illinois Property Tax End Conflict Of Interest