Simple answer. The mayor and politicians running Chicago seem clueless, incompetent, lost on how to run the city. There is no other reason but the mayor and her cronies are financially irresponsible. Why are other Republican-run major cities thriving and Chicago is suffering?

It seems Mayor Lightfoot does not know the ABCs of basic budgeting.

Mayor Lori Lightfoot does not seem to understand that it is not how much you take in but rather what you spend. She seems to think the salvation in fixing the city’s budget shortage is just increasing taxes. Increasing taxes to solve the budget gap is also what heavy-set obese Illinois Gov. JB Pritzker does for Illinois as well. Other cities, counties, and states under Republican leadership run their government finances lean and mean with lower taxes across the board. By having lower taxes across the board, these successful well managed blue states are attracting tens of thousands of new taxpayers and businesses daily. Lightfoot and Pritzker are ruining the lives of Chicagoans and Illinoisans.

In this article, we will discuss and cover Chicago Mayor Lightfoot To Increase Property Taxes For 2021.

The city is facing a major financial crisis like never before. Under the leadership of Mayor Lori Lightfoot, the city’s finances are out of control with no signs of a permanent solution. Lightfoot does not know what actions to take to fix the city’s financial crisis. There is more money going out than money coming in. The only solution the freshman rookie mayor has is to increase taxes. Lightfoot is going to start to increase property taxes to cover the budget shortfall. Illinois Governor JB Pritzker is lobbying and promoting changing the state’s flat tax to a progressive tax system.

He calls this change to a progressive tax system his FAIR TAX. For the FAIR TAX to become law, over 60% of Illinois voters need to vote YES for the FAIR TAX amendment on this November 3rd, 2020 election. Once the voters vote YES on the FAIR TAX, the Illinois state constitution needs to be changed for it to become law. Once the FAIR TAX passes, the city is expecting to increase income taxes. Other tax increases include the city’s gas tax and other city taxes. Lightfoot’s property tax increase can impact an increase of $255 for every homeowner in Chicago. To make matter worse, Lightfoot wants property taxes in Chicago to increase automatically with inflation. Lightfoot also wants to impose a 3-cent gas tax hike to deal with a $1.2 billion deficit.

Anyone with an average IQ will tell you that the only way Chicago will come close to fixing its financial crisis is to fix the broken pension system. The pension system is broken and being run like a Ponzi Scheme. Every day, hundreds of Chicago police officers, firefighters, teachers, and other public workers retire. City police and firefighters retire with 50% to 75% pay of their last salary prior to retirement. Most police officers and firefighters make well over $100,000 prior to retirement. This $100,000 per year is on the very low end and a conservative figure to illustrate our point. Do the math: 75% of $100,000 is $75,000.

Data suggests the average Chicago police officer makes $110,000 a year in pension income and the total payout for a retired Chicago police officer is $4,000,000 over the life of the retired officer. Compare the above to the average pension from Social Security benefits of $22,000 per year and a maximum $520,000 overall payment of an average social security recipient. An average Chicago police officer and/or firefighter retire at age 55 years old. People today are living longer due to better health care. The average lifespan today is 80 years old versus 70 years old two decades ago. The city is paying out an average of $110,000 to retired city workers. The pension system is running out of money and is negative every year and is being run like a Ponzi Scheme.

Both Lightfoot and the heavy-set overly obese JB Pritzker are too afraid of reforming the pension system because it can cost them votes. Every politician in Illinois is afraid of the powerful labor unions and does not have the stones to even suggest pension reforms. On October 21st, Lori Lightfoot announced her proposed 2021 budget to the Chicago City Council during the mayor’s annual budget address. She skirted the major budget crisis and told her audience that she hates to resort to higher property taxes but has no choice but to hike property taxes and other taxes due to the COVID-19 pandemic.

Chicago’s increasing property taxes is the number one cause for taxpayers and businesses fleeing the city to other locales with lower property taxes and affordable living.

The city is really deteriorating under Lori Lightfoot’s leadership. Lightfoot’s handling of the coronavirus outbreak was a total nightmare. Chicago was one of the first cities to shut down and one of the last to reopen. Thousands of businesses have closed and/or filed bankruptcy due to Lightfoot’s extended executive order of keeping the city closed. Lightfoot’s stance and support of defunding the police like many Democrat mayors in the nation have skyrocketed murder and crime rates in Chicago. Murder and crime rates in Chicago are at historic highs. Lightfoot’s support of black lives matter (BLM) and promoting the right of protests have caused millions of dollars in damages from the BLM riots. Two major BLM riots have destroyed many small businesses. A large percentage of these destroyed businesses have closed permanently. Others have filed for bankruptcy due to the combination of city and state regulations, riots, the increasing crime rates, and the city extending reopening and harsh restrictions.

Incompetent Chicago Mayor And Illinois Governor With No Solutions

Lightfoot and JB Pritzker are taking city and state governments backward instead of forwards like other Republican cities and states. While neighboring Indiana is thriving and booming during the coronavirus outbreak, Illinois is on the verge of bankruptcy. Chicago businesses can do better. However, Lightfoot’s tight restrictions are making small business owners next to impossible to operate at a profit. With businesses hurting, this means the city cannot collect the revenues to run the city government. This is why Lightfoot and the City Council are facing a $1.2 billion dollar budget deficit.

Now, these geniuses are turning to property tax hikes and other tax increases to balance the budget. The problem is both Lori Lightfoot and JB Pritzker have no solution in fixing the bleeding city and the state government is currently facing. The bottom line is you need to cut spending so you do not spend more than you take in. Need to do pension reform. You cannot keep on robbing Peter to pay Paul every year to meet the minimum pension obligations. Get rid of patronage hiring and hire government workers based on merit. Private city and state departments. Cut the fat. Impose term limits so it will fix corruption in city and state governments.

Cut taxes across the board to attract new taxpayers and businesses like Florida, Tennessee, Texas, and other blue states. Voters need to do their due diligence and stop electing incompetent politicians like Lightfoot and Pritzker. Vote for those who have proven themselves. Not career politicians who never ran a hot dog stand.

The city has never had a property tax cut in its history. Property taxes in Chicago have been skyrocketing for the past 20 years. Some areas like the Ravenswood area have homeowners seen their property taxes go up as much as 500% in the past 20 years. Many lifelong retired Chicagoans with paid-off homes can no longer afford to keep their homes due to the increasing property taxes. Many homeowners with paid-off homes have property taxes that is equivalent to a mortgage payment. With limited retired fixed income, there is no way in the world they can afford to pay the property tax increases year after year. There are no property tax caps either. Why should hard-working Americans pay for the decisions of incompetent politicians? By now, most Chicagoans and the rest of the country know how incompetent Chicago Mayor Lori Lightfoot is. Lightfoot is playing with fire in an already crime-ridden city. She is requiring all city employees to abide by the city’s coronavirus vaccine mandate or risk losing their jobs.

Over half the 14,000 members of the Chicago police department is planning on not taking the coronavirus vaccine due to major complications and sudden death due to blood clots with the new vaccine. Perfectly healthy young people are dropping dead in a matter of days and/or weeks after getting blood clots from the vaccine and dying without any warnings. Lori Lightfoot and JB Pritzker are mandating vaccines from all city, county, and state employees. JB Pritzker already ordered all businesses to have their patrons wear masks in their place of business. Businessowners not abiding by the JB Pritzker’s executive order mask mandate will be fined and could face license revocation and potentially indefinite shutdown of business operations ordered by the governor. The first-term governor and mayor are hands down power-hungry from the offices they hold.

Mass Exodus From The City And State Of Illinois Due To High Taxes, High Cost Of Housing, And Incompetent Leadership By Politicians

Increasing property taxes and the financially irresponsible mayor and politicians is the driving force of Chicagoans fleeing the city.

Michelle McCue of Gustan Cho Associates is a senior loan officer and a lifelong Chicagoan. Michelle McCue has also worked for the city and is an expert in the Chicago housing market. Michelle said the following:

The city estimates a homeowner with $250,000 in property value will pay an average of $56 more, slightly less than the percentage increase in the total levy. But both new construction and changes in assessment methodology could shift more of the property tax burden to businesses next year. The $93.9 million hike includes $42.5 million to fully fund pension contributions, as required by state law, $35.4 million to keep the city property tax levy even with inflation and $16 million from new property construction. Lightfoot also proposed tying future property tax increases to inflation, meaning the amount of property taxes the city demands from property owners will increase each year. While the city council would still have to approve the increases as part of the annual budget process, tying property taxes to increases in the consumer price index could institutionalize automatic increases and reduce discussion of alternatives. Future mayors and alderman will have less incentive to find ways to control spending and find efficiencies if the budget process always assumes property tax hikes.

Everything in Chicago is more expensive.

Chicago also has a city tax which means it costs more to buy anything in the city than its neighboring collar communities. Gov. JB Pritzker doubled the state’s gas tax in 2019. This law gave Chicago the option to raise the city gas tax by cents a gallon or to a total of 8 cents per gallon in Chicago. Lightfoot took advantage of this opportunity in raising the city’s gas tax which gave an additional $10 million in revenue.

Michelle McCue of Gustan Cho Associates said the city is not replacing retiring workers due to the financial crisis they are facing.  Michelle McCue said the following:

Personnel reductions would save a total of $106.3 million through 350 layoffs and 1,912 vacancies left unfilled. They mayor is also asking all non-union employees to take five unpaid furlough days.

Look At The Chart Below On How Much Chicagoans Are Facing In Property Tax Increases: 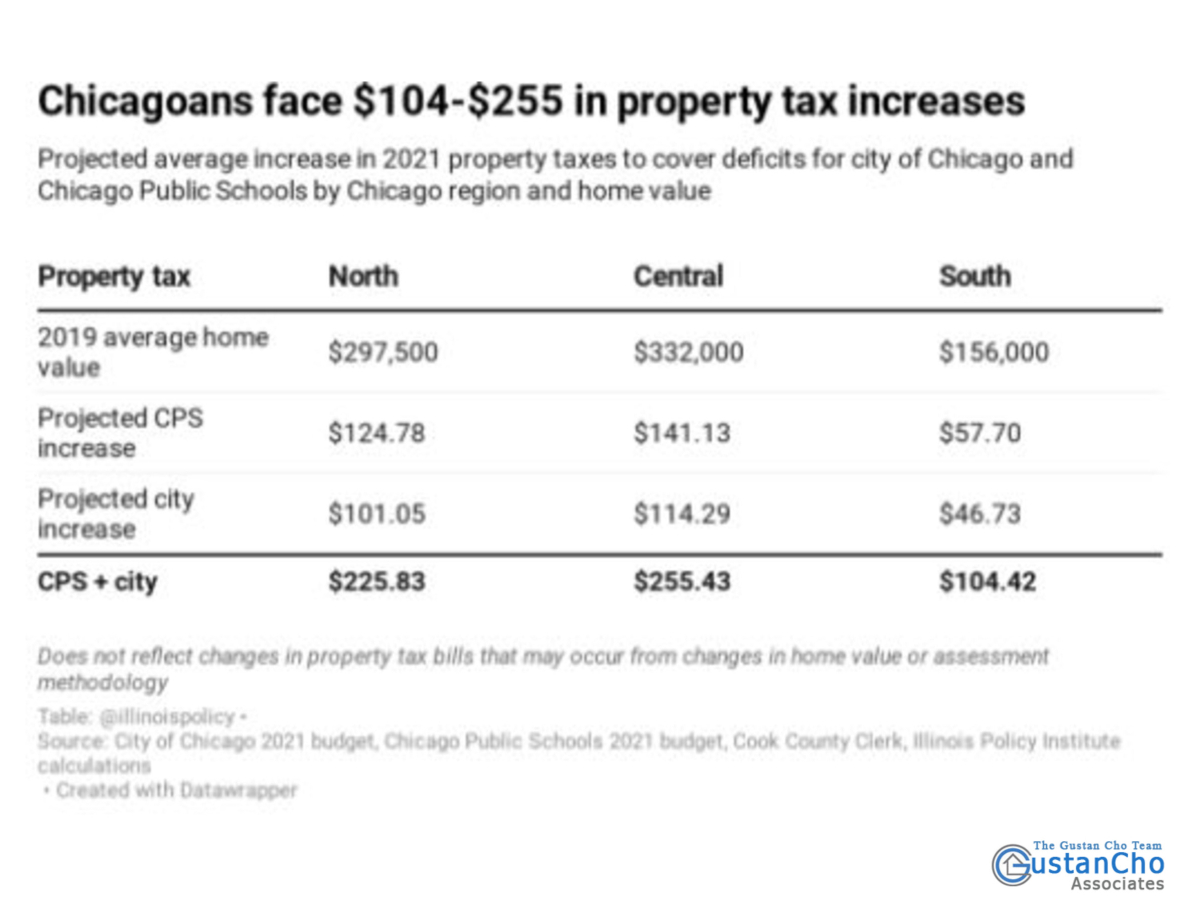 The city is a major mess. There is no green light at the end of the tunnel. High property taxes are hurting Chicago homeowners in more ways than one. High property taxes mean lower home appreciation. High property taxes, corruption, high cost of living, incompetent leadership, high crime, and far-left liberal ideas and policies is driving residents away from the city. The city needs new leadership. A competent mayor with a proven track record will be a great start. 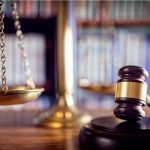 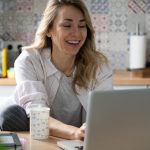