Fannie Mae and Freddie Mac are the two mortgage giants in the United States.

In this article, we will discuss the breaking news of President Trump To Privatize Fannie Mae And Freddie Mac.

The Roles Of Fannie Mae And Freddie Mac 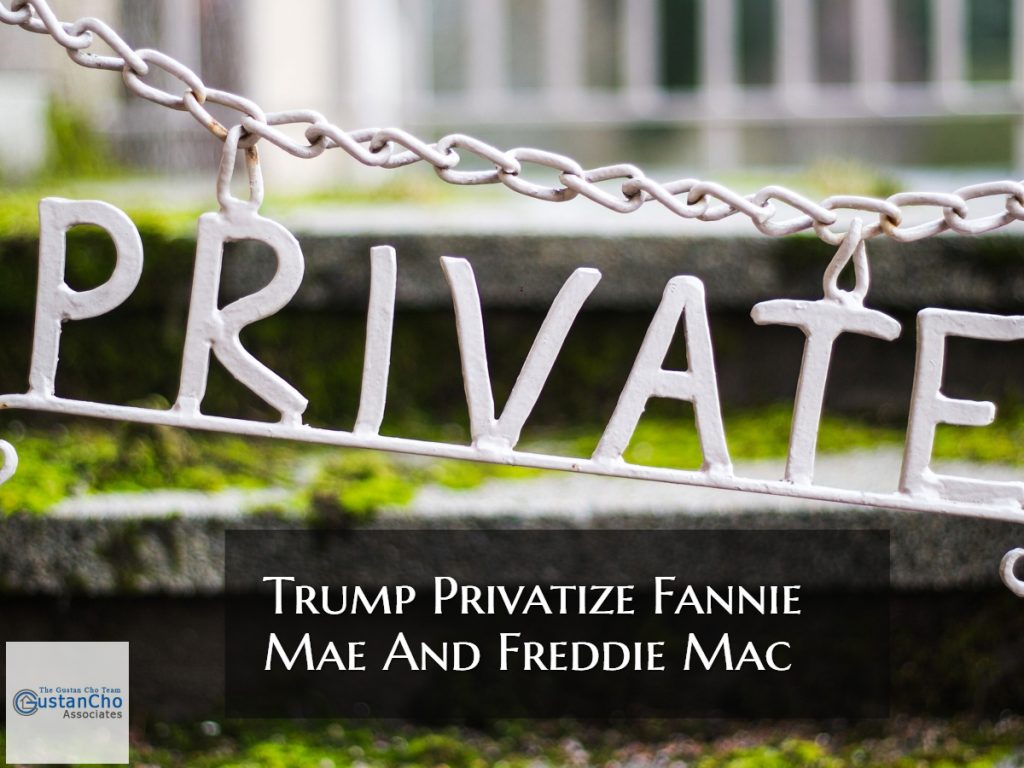 Both Fannie Mae and Freddie Mac were created by the U.S. Congress.

This enables hard-working individuals and families to purchase homes. By relieving lenders to pay down their warehouse lines of credit, lenders can always have a steady stable supply of funds to fund more loans.

Fannie Mae and Freddie Mac work closely with investors of the secondary mortgage markets in selling them mortgage-backed securities.

On Thursday, September 5th, 2019, The U.S. Department of Treasury announced its plans in making changes to the U.S. Housing and Real Estate Markets.

Karen Cordes, the Director of Underwriting and Operations at Gustan Cho Associates Mortgage Group issued the following comment after hearing the news:

The plan doesn’t detail what will happen to the government’s stakes in the firms or how they will build their capital up enough so they can go private again. In my opinion, housing prices continue to rise across the country. The privatization of Fannie Mae and Freddie Mac will protect taxpayers and help Americans who want to buy a home.

There are mixed emotions about this breaking news on privatizing Fannie/Freddie. Democrat Ohio Senator Sherrod Brown is an opponent of privatization and issued the following statement:

Telling American taxpayers that the plan will make mortgages more expensive and harder to get is deceptive and misleading It will make Americans harder to buy a home. I’m urging President Trump: Make it easier for working people to buy or rent their homes, not harder.

The majority of mortgage professionals and experts welcome the privatization of Fannie Mae and Freddie Mac and its release from conservatorship. Leading economists and housing analysts agree the government postpone the privatization until policy reforms have taken place and mastered.

This is likely because under the current state of housing policy, experts believe there would be a largely negative effect on the consumer (and therefore the health of the housing market) if the GSEs were to be privatized. Under their federal status, the GSEs enjoy​ a number of significant benefits that would be eliminated if privatized. Local and State tax exemptions, lower federal borrowing costs, and the market premium placed on their federally backed securities would all disappear and create a situation where capital costs would increase. Experts predict that these increased capital costs would be passed on to consumers in the form of increased mortgage costs. While a family at the higher end of the wealth spectrum may not feel this change, low and moderate-income families would likely see their purchasing power take a hit. Another significant factor to think about would be the fate of the most popular mortgage product in the country today: the 30-year, fixed-rate, pre-payable mortgage. Experts predict this product would likely fade away as private lenders would be averse to taking on the risk associated with this type of mortgage.

Dale Elenteny, a Senior Vice President at Gustan Cho Associates was upbeat with the news and issued the following statement:

On the positive side of the ledger, experts suggest that privatization would allow Fannie and Freddie to investigate merging with other primary mortgage actors. This would give Fannie and Freddie the ability to expand their activities and create efficiency gains. So the question now becomes: will this even happen? I give it a 50-50 chance that the conservatorship can get kicked down the road to the next administration. Eventually though, it will happen. With so much at stake for the housing industry, it’s no wonder that insiders would prefer to see policy reform and a framework put in place first.

This is a developing story. This breaking news caught everyone by surprise. We will keep our viewers informed as more news develops.

Gustan Cho NMLS 873293 is the National Managing Director of Loan Cabin Inc. dba Gustan Cho Associates NMLS 1657322. Gustan Cho and his team of loan officers are licensed in multiple states. Over 75% of the borrowers of Gustan Cho Associates (GCA Mortgage Group) are folks who could not qualify at other lenders due their lender overlays on government and conventional loans. Many mortgage borrowers and real estate professionals do not realize a mortgage company like GCA Mortgage Group exists. We have a national reputation of being a one-stop mortgage company due to not just being a mortgage company with no lender overlays but also offering dozens of non-QM and alternative financing loan programs. Any non-QM mortgage loan program available in the market will be offered by the team at Gustan Cho Associates. Our team of support and licensed personnel is available 7 days a week, evenings, weekends, and holidays.

Negative Interest Rates To Spread To The U.S. Per Alan Greenspan

FHA Guidelines During Versus After Chapter 13 Bankruptcy