Critics believe Pritzker’s incompetence is going to lead Illinois to a fast road to bankruptcy.

The problem is Pritzker is not just increasing and creating new taxes:

In this breaking news article, we will discuss and cover JB Pritzker’s Fair Tax Misleading To Low-Income Illinoisans.

The Fair Tax Can Devastate Illinois

The U.S. economy was booming prior to the coronavirus pandemic.

The Trump administration already made it perfectly clear the federal government will not be bailing out financially mismanaged states like Illinois.

Changing The State’s Flat-Tax To A Progressive Tax System

JB Pritzker was asked by a member of the Press if he was going to delay changing the state’s flat-tax to a progressive tax system. Pritzker fired right back and said that right now is the best time to raise taxes on the wealthy due to the financial crisis the state is in. Pritzker does not realize the devastating effect changing the flat-tax system to a progressive tax will do to Illinois. Over 100,000 small business owners will be affected. Small business owners can expect to pay more than 47% in higher state taxes if the progressive tax is implemented. Pritzker spent over $56 million dollars of his own money lobbying for the FAIR TAX. He is adamantly saying the FAIR TAX will tax the rich and middle-class and lower-class income earners will be paying less in income taxes. According to data from economists, this is a blatant lie by the governor.

What Experts Are Saying About The FAIR TAX

An Illinoisan making $12,400 a year would still pay nearly $1,800 in state and local taxes under the governor’s plan – a higher share of their income than residents of all but two states. One of the primary arguments Gov. J.B. Pritzker has made in favor of his progressive income tax proposal is that the state needs to provide tax relief to lower- and middle-income Illinoisans. For poor Illinoisans, that amounts to $6. Low-income Illinoisans would still send more than 14% of their income to state and local government under his plan – nearly $1,800 for a resident making $12,400 a year. That would stand as the highest tax burden on low-income residents in the Midwest and third highest in the nation, according to the left-leaning Institute on Taxation and Economic Policy, assuming other states have not made drastic tax changes.

See the chart below 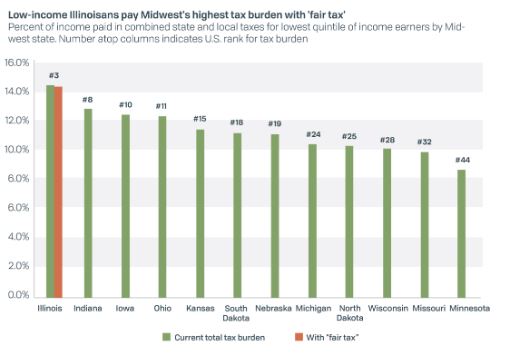 In the following paragraph, we will discuss how the FAIR TAX will help low-income wage earners.

Maria Windham of Gustan Cho Associates said the following concerning the above statement:

This calculation does not include expanded exemptions or deductions, such as an additional $100 income tax deduction per child if the taxpayer were eligible. Nor does it include the $100 gas tax hike and $50 dollar vehicle sticker hike signed by Pritzker last year, which fell disproportionately on the poor. It also does not include increases in residential property tax bills, which have risen at a compound annual growth rate of 4.6% for the past 20 years. 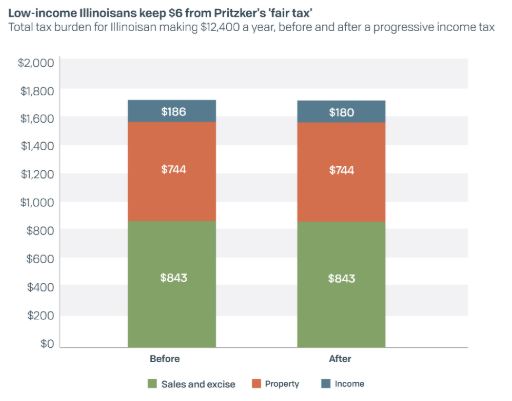 No matter how much you increase taxes in Illinois will not make a dent in fixing the state’s financial crisis. The state’s pension system is broke. Illinois needs pension reform. An average police officer with 20 years in service can retire with 50% of their pay. The average Illinois police officer with 20 years on the force averages $100,000 per year. The average age of a rookie Illinois patrolman is 23 years old. So, if the average patrol officer with 20 years on the force is 43 years old. The 43-year-old police officer can retire with 50% of their $100,000 a year annual salary for the rest of their lives. Due to extended life spans today, that officer can live past 80 years old. So this officer will make $50,000 for the rest of his or her natural life with increases and benefits. This is like a PONZI SCHEME. There is no way in the world the state can fix the pension shortage. The state needs pension reform.

The governor often argues the state’s current income tax structure is regressive and leads to lower-income Illinoisans paying the same tax rate as billionaires like him. He further argues his “fair tax” proposal would address this inequality. However, analysis by ITEP shows this isn’t true. The effective income tax rate (the total income tax rate after accounting for exemptions and deductions) for the lowest 20% of income earners in Illinois is 1.5% while the effective income tax rate for the highest income earners is 4.1%. Under the governor’s proposal, the effective income tax rates for Illinoisans in the bottom 20% would remain virtually unchanged, dropping at most to 1.44%. That is because Illinois’ flat income tax isn’t the source of disproportionate state and local tax bills. Property, sales and excise taxes are the largest tax burdens on low- and middle-income Illinoisans. In the Chicago area, property tax bills can take nearly 27% of the median household’s income. With virtually no change in income taxes for the poorest Illinoisans, the state’s recently enacted tax and fee hikes will completely erase any promised tax reductions. The tax burden on these Illinoisans will instead continue to rise because of these tax hikes and the constant increase in Illinois property taxes, which are the second-highest in the nation. Furthermore, the progressive income tax would likely strip Illinoisans of employment opportunities, hitting the state’s largest job creators – small businesses – with large tax hikes as the economy is attempting to regain its footing after the COVID-19 crisis.

The FAIR TAX needs voter approval in this coming election on November 3rd, 2020 for it to become law. JB Pritzker is very confident voters will fall in to his pitch that the FAIR TAX will save average wage earners money and lower taxes for them. Another hurdle Pritzker faces is a mass exodus of wealthy taxpayers and small business owners. Illinois leads the nation with the highest number of out-migration. Taxing everything he can think of and creating new taxes is not the way of fixing the state’s financial crisis. It is no doubt that Pritzker’s plans will backfire not just on him but will hurt Illinoisans of all income brackets.